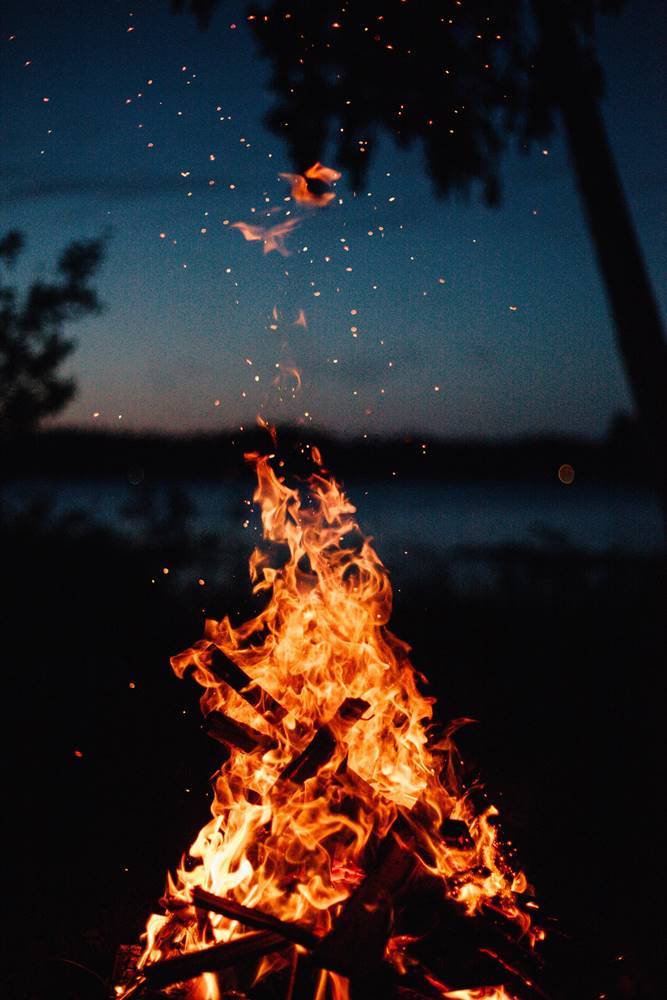 Bealtaine is one of the main Celtic fire festivals of the year. A time to welcome in summer, a time to welcome growth and fertility. A time to celebrate the Sun in all its might and a time to put the animals to pasture after a considerable amount of times spent indoors out of the cold depths of winter.

It is sometimes referred to as Cetsamhain which means “opposite Samhain.” Bealtaine and Samhain, divided the year into its two primary seasons, Winter and Summer or also known as the dark half and light half of the year.In Celtic tribal communities, the festival went by many names: Bealtaine in Ireland, Bealtunn in Scotland, Shenn do Boaldyn on the Isle of Man and Galan Mae in Wales.The word “Bealtaine” means bright fire and it was believed that if you washed you face in the grass dew of Beltaine morning, it would bring health and beauty for the year ahead to the person that carries out this tradition.Bealtaine was the time of re-awakening and was the time to celebrate life and growth.It was a time of revitalisation, a time of change, a time of colour and beauty and a time to throw off the shackles and of winter and step in to the sunlight. Like all other indigenous tribes around the world, the seasons were everything. And when the seasons meant everything then this was a cause for celebration. They were welcomed in with style, great bonfires were lit, ceremonies were held andit was also an ideal time for courting and handfasting (Marriage). Jumping over the fire was a tradition and believed to bring a prosperous and healthy year to the participants. Driving cattle through smoke from the fire of Bealtaine was common practice and decorating the cattle with May flowers was also known to happen in some parts. This was both a blessing to the animals and to bring good milk and calf yields from the cows. Cattle were sometimes driven through fairy forts with the hope that the thorns and briars would graze their skin and the blood that fell to the ground would be a good offereing to the fairy folk and Spirit.Bealtaine also marks the midway point between the Spring equinox and the Summer solstice. May day always has the tradition of gathering May flowers and leaving them in door ways and windows, it helped with bringing luck to households and to also ward off negative energies / evil spirits. It was considered very bad luck to give away salt, fire or water on this day as it would leave the particular household open to poverty for the coming months. Increased fairy and Spirit activity was always to be expected, as this was the time that these energies became more heightened, they were always to be respected, gifts and offerings would sometimes be left in the hedgerows. Sacred trees were very important at this time of year and the fowers and branches were widely used. Cutting of branches and twigs would normally be forbidden but was allowed and pardoned on the eve of Bealtaine. What a fascinating time of year, and how fantastic it is to keep these traditions alive here in Ireland.

Whitethorn: Whitethorn is a deeply magical tree and is one of the three trees at the heart of the Celtic Tree Alphabet, the Faery Triad, ‘by Oak, Ash and Thorn’. Traditionally worn on the eve of Bealtaine. It  was both worn and used to decorate the home at Beltane.

Birch: Birch is regarded as a feminine tree and Deities associated with Birch are mostly love and fertility goddesses. It is one of the first trees to show its leaf in Spring. Eostre/Ostara, the Celtic goddess of Spring was celebrated in festivities and dancing around and through the birch tree between the Spring Equinox and Bealtaine. Birch twigs were traditionally used to make brooms, new broom sweeps clean (Fresh start)

Rowan: A tree of protection and healing. Branches of Rowan were placed as protection over the doors of houses and barns at Bealtaine to protect from increased Faery activity as they woke from their winter slumber. Sprigs were worn for protection also. Rowan berries have a tiny five-pointed star on the bottom reminiscent of the pentagram representing protection.

Library Study
We use cookies on our website to give you the most relevant experience by remembering your preferences and repeat visits.
ACCEPT ALLREJECT ALL
Privacy consent

This website uses cookies to improve your experience while you navigate through the website. Out of these, the cookies that are categorized as necessary are stored on your browser as they are essential for the working of basic functionalities of the website. We also use third-party cookies that help us analyze and understand how you use this website. These cookies will be stored in your browser only with your consent. You also have the option to opt-out of these cookies. But opting out of some of these cookies may affect your browsing experience.
Necessary Always Enabled
Necessary cookies are absolutely essential for the website to function properly. These cookies ensure basic functionalities and security features of the website, anonymously.
Functional
Functional cookies help to perform certain functionalities like sharing the content of the website on social media platforms, collect feedbacks, and other third-party features.
Performance
Performance cookies are used to understand and analyze the key performance indexes of the website which helps in delivering a better user experience for the visitors.
Analytics
Analytical cookies are used to understand how visitors interact with the website. These cookies help provide information on metrics the number of visitors, bounce rate, traffic source, etc.
Advertisement
Advertisement cookies are used to provide visitors with relevant ads and marketing campaigns. These cookies track visitors across websites and collect information to provide customized ads.
Others
Other uncategorized cookies are those that are being analyzed and have not been classified into a category as yet.
SAVE & ACCEPT